In this Google Apps Script tutorial for beginners you'll learn how to automate the formatting of a Google Sheets document.

In this Google Apps Script tutorial for beginners you’ll learn how to automate the formatting of a Google Sheets document. With just a couple lines of code, you can automate almost anything within Google’s many apps. You’re wondering what Google Apps Script is? The short answer to that question is: Google Apps Script is a scripting language based on JavaScript, that’s built in to Google apps. Have a look a this blog post for an in depth explanation.

This tutorial also comes in video form, where basic programming concepts like variables, objects, etc. are explained. Go ahead and check it out.

What we will be automating

Imagine you receive a report every week and you find yourself formatting it every single time. Wouldn’t it be cool to simply click on a button and have the report format itself?

That’s exactly what we’ll be doing in this tutorial! Well create a straight forward automation script to format a Google Sheets file.

Google Apps Script Tutorial - Where to get started

The script editor opens in a new browser tab and it contains a placeholder function by the name myFunction. You can delete this function and start writing your own.

We’ll start off by naming our function, that is the code that will run for the formatting, formatReport.

Then we will do the following:

Now it’s time to define the formatting of our header. We’re changing the font weight to bold and the color to white. The last change is the background color which will be a beautiful saperis purple.

Now we shift our attention to the entire table. We change the font to Roboto and align the cell content to the center.

The last line, table.setBorder… looks quite a bit complicated. To put it short we’re setting all four sides of every cell border to solid purple.

The last step in this function is to create a filter. We do so by calling the createFilter method on our table object.

Create a menu to run the code

We probably don’t want to have to start up the script editor every time we want to run our code. That would be a bit tedious.

Instead we want a menu to appear in Google Sheets so we can easily run our automation script.

We create a separate function named onOpen. This is the default name provided by Google for whenever you want to add a custom menu to a Google app.

Putting it all together

Now we have everything we need for our automation script. Here how the script should look once you’re done putting it together.

Before you leave the script editor be sure to save your automation script by clicking on the Save icon and giving it a name. In our tutorial we named our script Report Formatting.

To actually run our automation script so that it formats our report, we head back to our Google Sheets document.

Reload the document in your browser and after about 15 seconds our Custom Formatting appears in the menu list. That menu was created by the second function in our script we created.

You will be asked to grant your script the rights to access your account. Confirm this. Then click again on Custom Formatting > Format Report to run it.

After about 5 seconds your report should look something like this.

Learn how to automate Google Sheets with Google Apps Script! Check out our comprehensive online course. 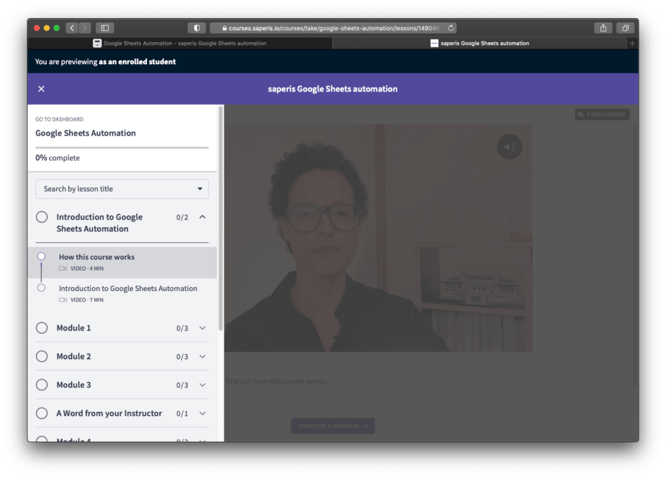 That wasn’t that difficult, was it? If you’re new to automation or coding lots of things in the code above might seam strange to you. What are variables? What is a function? What are methods? And many more questions…

I encourage you to check out our Google Apps Script playlist on YouTube to learn more about this useful coding language.

And I also suggest you give our Google Sheets Automation online course a look.

Learn how you can copy a row, or multitple rows, from one sheet to another in a Google Sheets document by using Google Apps Script!

Google Sheets If Then formula allows us to react in two different ways depending on if something is true or false. Learn how to use this formula now!

What is Google Apps Script? It's a cloud-based scripting platform developbed by Google. With Apps Script you can automate Google services.

Don't want to miss any of our blog posts about Google Workspace? Then go ahead and sign up!